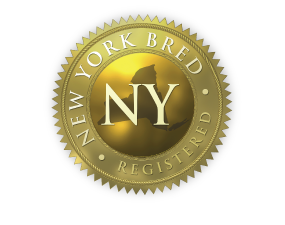 The horseracing industry in the United States has been under pressure in recent years as handle, purses, and foal crops decrease. There is a huge silver lining to this dark cloud, however, in that racing and breeding in the state of New York is stronger than its ever been.

The purse examples shown below have formally been announced for the Aqueduct Winter/Spring meet. Although nothing has been announced beyond that meet, conventional wisdom states that there is a reasonable expectation that purses will be even higher for the Belmont Spring/Summer meet and even higher for the Saratoga meet as has been the case historically. For examples of the Aqueduct Winter/Spring meet purses see below:

The Benefits of Racing New York-breds

New York-bred horses are horses that are foaled in the state of New York and meet certain criteria for being a registered New York-bred. As a registered New York-bred a horse will be eligible to compete in races restricted to New York-breds. In 2014 in New York there were over 800 races written for restricted New York-breds worth over $44.5 million in purses. Unlike open company where horses can ship in from anywhere in the world to compete for the purse, restricted races, by their very name, are restricted to only a certain group of horses and the universe of potential competitors is vastly smaller. Despite the fact that the races are much easier to win the purses are extremely lucrative. Furthermore, there is an entire stakes program designed for and restricted specifically to New York-breds presenting even more opportunities for a horse to earn purse money and for owners to realize the thrill of racing in stakes races.

Another interesting series of stakes races is the New York Stallion Stakes Series. This series consists of ten races with purses totaling over $1,000,000 run throughout the year with divisions for 2-year-olds, 3-year-olds, and 3-year-olds and up run from 6 furlongs to 1 mile on both dirt and turf. Not only is this series of stakes races restricted to New York-breds, its further restricted to horses sired by nominated New York-standing stallions. New York-breds sired by out-of-state stallions are not eligible for these races. In essence these stakes races are double-restricted and horses that are eligible have the benefit of competing against a very small universe of competitors and present a great opportunity for the horse to have a reasonable chance to earn great purses and add black type to its resume.

These stakes series and events are all in addition to the regular palate of overnight stakes races for New York-breds carded at the various New York tracks throughout the year.

Since NYRA announced its 36% purse increase on September 24 average sale prices of New York-bred weanlings and yearlings at the fall sales has been nothing short of spectacular.

As an interesting example, lets look at a hypothetical person who bred a New York-bred foal from a New York-based stallion and decided to keep and race the foal. Lets assume that this foal were talented enough to run through its state-bred conditions and were to now run in an open company N1X Allowance race run in New York. That owner/breeder would be running for an effective purse of $100,500. The base purse of $67,000 would be supplemented by a 20% Open Owner Award ($13,400) and a 30% Breeder Award ($20,100).

In 2014 in New York there were over 800 races written for restricted New York-breds worth over $44.5 million in purses.