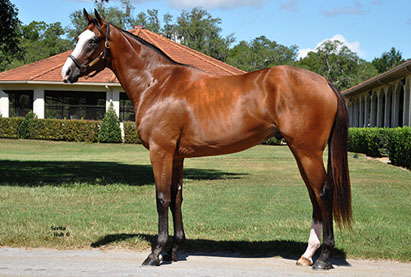 This magnificent colt is by a leading New York sire and a well-bred mare. He has the breeding to to run on any surface and compete at classic distances.

GiveTheMan a Cigar is entered to run in Wednesdays 9th race at Penn National which is a $5.000 Claiming N2L race going 5 1/2 furlongs for 3-year-olds and up which have never won two races. He drew post position 1 and jockey William Otero is named to ride. Otero is currently ranked 9th in the Penn National jockey standings with 42 wins and a 14% winning percentage.

GiveTheMan a Cigar is currently 12-1 in the Daily Racing Form morning line.

GiveTheMan a Cigar breezed on Friday working 4 furlongs in 48.40 at Penn National. That work was 4th best out of 23 at the distance.

We spoke with trainer Eddie Rojas after the breeze. Eddie said, Hes doing great and training very well. He worked excellently this morning.

Eddie will breeze GiveTheMan a Cigar on a 7-day breeze schedule preparing him for his next race which we expect to the $5,000 Claiming N2L going 5 1/2 furlongs at Penn National on December 23.