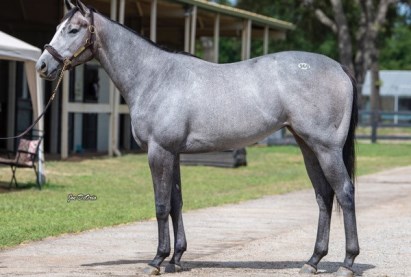 LionessOfBrittany ran a huge second at Gulfstream Park on Saturday missing the stakes win by less than a length to a highly accomplished 3-year-old even money filly. Breaking from post 6 LionessOfBrittany prompted the pace three-wide, could not quite match strides with the winner in upper stretch, but continued on willingly to narrow the gap late.

We spoke with trainer Steve Klesaris after the race and Steve said, She ran huge for us today. Turning for home she had every right to retreat but instead she dug in and closed ground. Shes a very fast filly.

We also spoke with Hibiscus Stables CEO Mike Oliveto after the race. Mike said, I cant say enough about this filly. Every time weve asked her to step up shes responded. Shes still only 3 years old so she has a great deal of improvement ahead of her. Shes an exciting horse for us and, of course, the partners. Now stakes placed shell carry some residual value as we go forward. I cant wait t see whats next for her.

Well see how LionessOfBrittany comes out of the race and well point her accordingly.

LionessOfBrittany is entered to run in Saturdays 7th race at Gulfstream Park which is the Melody of Colors Stakes $75,000 going 5 furlongs on the turf for 3-year-old fillies. She drew post position 7 and jockey Miguel Vasquez is named to ride. Vasquez is currently ranked seventh in the Gulfstream Park jockey standings with 41 wins and a 10% winning percentage.

First race post time is 12:10 PM and LionessOfBrittany's race is Race 7 which is scheduled to go off at 3:11 PM.