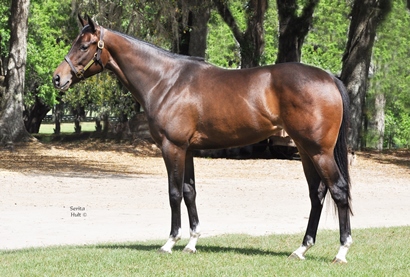 Highway Queen breezed on Friday working 3 furlongs in 36.00 over the Belmont Park training track. That work was the bullet of 15 at the distance.

We spoke with trainer Steve Klesaris after the breeze. Steve said, She worked great. Its looking like shell run next in the first book in Saratoga.

Steve will keep Highway Queen fresh as he points her to the $35,000 Claiming N2L going 5 1/2 furlongs on the turf at Saratoga on July 14.

Highway Queen ran a strong third in her race at Belmont Park on Friday prompting the pace then and finishing with energy to hold on for third. Breaking from post 3 Highway Queen dueled very early on after being hustled from the gate, briefly got shaken off and prompted Rigby before surging into the turn to latch on and duel once more to the outside, got coaxed along at the three-eighths, spun just off the inside into upper stretch and ran on and surged home to preserve the show honors.

We spoke with trainer Steve Klesaris after the race and Steve said, She ran great today. This is her correct level. Well try again in a similar race next time.

We also spoke with Hibiscus Stables CEO Mike Oliveto after the race. Mike said, Shes a nice filly. She didnt really grow much from her 3-year-old to her 4-year-old year so we felt we needed to make it a little easier for her. She picked up a nice purse here today and shell be back for Saratoga to try to win it up there.

Well see how Highway Queen comes out of the race and point her accordingly.