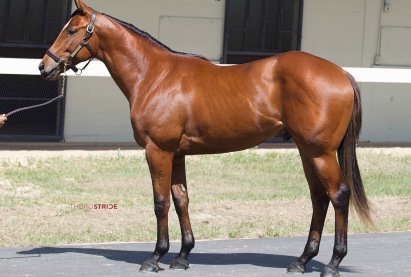 Tonalistic is entered to run in Sundays 6th race at Belmont Park which is a Maiden Special Weight going 7 furlongs on the turf for 3-year-olds and up. He drew post position 9 and jockey John Bisono is named to ride. Bisono currently has 7 wins and an 7% winning percentage for the year.

Tonalistic is currently 20-1 in the Daily Racing Form morning line. Hes the DRF Consensus second choice in the race. One DRF handicapper selects him to win the race.

First race post time is 1:00 PM and Tonalistic's race is Race 6 which is scheduled to go off at 3:34 PM. Everyone is invited to join us at Belmont Park for a fun day of racing.

Tonalistic breezed on Saturday working 4 furlongs in 50.00 at Delaware Park. That work was 37th out of 79 at the distance.

We spoke with trainer Steve Klesaris after the breeze. Steve said, He worked well. Hes ready to go off of this work. Im looking at the Maiden $40,000 at Delaware next week at.

Steve will point Tonalistic tp the Maiden Claiming $40,000 going 6 furlongs at Delaware Park on May 29.