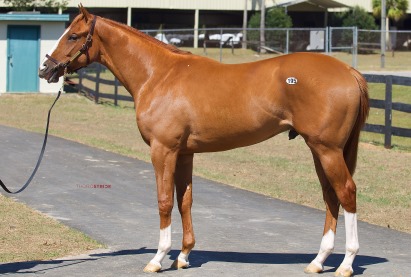 Will Take Control ran a good third in his race at Gulfstream Park on Friday stalking the 25-1 pace setter only to see the draw away winner close from the clouds and pull away by 9. Breaking from post 4 Will Take Control bumped with Weight of Glory at the start, raced close up inside to the turn, lodged a brief bid in the two-path approaching the stretch, and ran on to narrowly miss second.

We spoke with trainer Steve Klesaris after the race and Steve said, He showed good improvement today. His Beyer Speed Figure shows hes going in the right direction. The rider is begging me to run him on the turf. He feels hes not grabbing the ground the way he should and that hes a better horse than this. We have to try it.

We also spoke with Hibiscus Stables CEO Mike Oliveto after the race. Mike said, Hes improved with each subsequent start. The rider wants to try the grass so well probably do that next time. Overall he ran a good race and just lost second by a nose. Nobody was beating the winner today so the result is a bit better than it looks on paper.

Well see how Will Take Control comes out of the race and Steve will point him accordingly.

Will Take Control is entered to run in Fridays 10th race at Gulfstream Park which is a $35,000 Maiden Claiming race going 1 mile for 3-year-olds. He drew post position 4 and jockey Edgard Zayas is named to ride. Zayas is currently ranked fourth in the Gulfstream Park jockey standings with 56 wins and a 15% winning percentage.

Will Take Control is currently 10-1 in the Daily Racing Form morning line. One DRF handicapper selects him as his second choice in the race.