Ace Up Her Sleeve 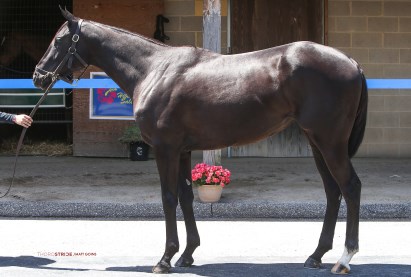 The Dialed In filly, now named Ace Up Her Sleeve, is entered to run in Fridays 6th race at Saratoga which is a Maiden Special Weight going 6 furlongs for 2-year-olds. She drew post position 9 and jockey Tyler Gafflione is named to ride. Gafflione is currently ranked 5th in the Saratoga jockey standings with 16 wins and an 16% winning percentage.

Ace Up Her Sleeve is currently 15-1 in the Daily Racing Form morning line. One DRF handicapper selects her as his third choice in the race.

The Dialed In filly breezed on Tuesday working 5 furlongs from the gate in 1:01.80 at Delaware Park. That work was the bullet of 4 at the distance.

We spoke with trainer Steve Klesaris after the breeze. Steve said, She put in another excellent breeze. Ill paddock school her between now and her race. Shes all set to run on August 13.

Steve will point the Dialed In filly to the Maiden Special Weight going 6 furlongs at Saratoga on August 13.