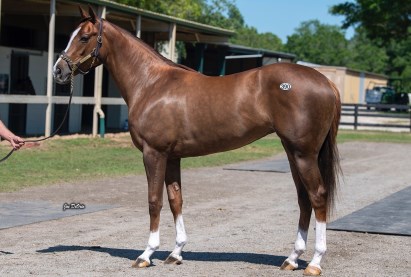 Seize the Whiskey ran a very nice third in her race at Parx on Tuesday chasing a 3-5 gate to wire logical winner. Breaking from post 7 Seize the Whiskey stalked close up early on the outside, commenced her bid on the turn, loomed in upper stretch, dug in gamely, then weakened late and lost second at the wire.

We spoke with trainer Steve Klesaris after the race and Steve said, She ran a very big race, bigger than it looks on paper. She chased a very talented horse and held her own every step of the way, all against older horses. This was a bit step up for her.

We also spoke with Hibiscus Stables CEO Mike Oliveto after the race. Mike said, She ran an extremely professional race today. Sometimes horses, especially filles, dont show their best stuff until they get a little older. Today was a nice step in the right direction for her.

Well see how Seize the Whiskey comes out of the race and point her accordingly.

Seize the Whiskey breezed on Saturday working 4 furlongs in 49.49 over the Belmont Park training track. That work was 58th of 115 at the distance.

We spoke with trainer Steve Klesaris after the breeze. Steve said, She worked OK this morning. Shes ready to go for her next start. Im looking at race for her a week from Sunday.

Steve will keep Seize the Whiskey fresh as he prepares her for her next race which could be the $30,000 Maiden Claiming race going 6 1/2 furlongs at Aqueduct on November 14.